New Ransomeware Thanatos On The Prowl

When the Thanatos Ransomware infects a computer it will use a new key for each encrypted file. The problem, according to researcher Francesco Muroni, is that these keys are never saved anywhere. This means that if a user pays the ransom, the ransomware developer does not have a method that will actually be able to decrypt each file. Therefore, it is not recommended that victims pay the Thanatos ransom for any reason.

While the encryption part of Thanatos is a mess, the ransomware  is the first to accept Bitcoin Cash as a ransom payment.

While Thanatos accepts both Bitcoin and Etherum as a ransom payment, this is the first time that Bitcoin Cash has been accepted as shown in the ransom note below.

How Thanatos Encrypts a File

When encrypting files it will append the .THANATOS extension to an encrypted file’s name. For example, a file named test.jpg would be encrypted and renamed as test.jpg.THANATOS.

After the encryption process is completed, it will then connect to iplogger.com/1t3i37 URL in order to keep track of the amount of victims that have been infected.

Finally, it will generate an autorun key called “Microsoft Update System Web-Helper” that opens the README.txt ransom note every time a user logs in. This ransom note can be seen in the article’s previous section.

This ransom note contains instructions to send a $200 USD ransom payment to one of the listed Bitcoin, Ethereum, or Bitcoin Cash addresses. The user is then instructed to contact thanatos1.1@yandex.com with their unique victim ID in order to receive a decryption program.

If anyone is infected with this ransomware, they should contact us about the possible creation of a brute force program.

How to protect yourself from the Thanatos Ransomware

First and foremost, you should always have a reliable and tested backup of your data that can be restored in the case of an emergency, such as a ransomware attack.

Last, but not least, make sure you practice the following security habits, which in many cases are the most important steps of all:

Security Researchers Have discovered A”Vaccine” For The Huge Cyber-Attack

The creation of a single file can stop the attack from infecting a machine.

However, researchers have not been able to find a so-called kill switch that would prevent the crippling ransomware from spreading to other vulnerable computers.

By creating a read-only file – named perfc – and placing it within a computer’s “C:\Windows” folder, the attack will be stopped in its tracks. 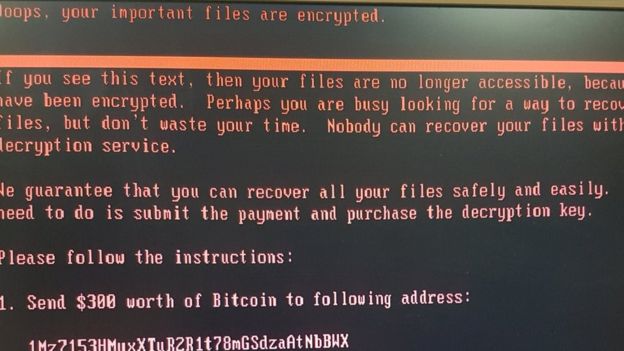 “Even though it will make a machine ‘immune’,” explained computer scientist Prof Alan Woodward, “It is still a ‘carrier’ (to use the biological analogy).

“It will still continue as a platform to spread the ransomware to other machines on the same network.”For the vast majority of users, simply running an up-to-date version of Windows will be sufficient to prevent the attack taking hold, were it to infect your PC.

Researchers predict the spread of this new ransomware is likely to be much slower than last month’s WannaCry attack. Code analysis showed the new attack did not attempt to spread itself beyond the network it was placed on.

Several experts are predicting that the attack will not spread significantly further than it did on Tuesday, unless it is modified.”There is low risk of new infections more than one hour after the attack,”

WannaCry ransomware that claimed hundreds of thousands of victims across 150 countries has hit speed and intersection cameras in Victoria Austrailia, Radio 3AW has reported.

According to the radio station, 55 cameras in the state belonging to vehicle monitoring and enforcement service Redflex were infected with the ransomware after a rogue USB was inserted by someone performing maintenance on the now-infected cameras.

It is understood that the infection came as a result of “human error” rather than a targeted attack aimed at holding the Australian state to ransom.

The cameras are not connected to the internet, however, which means the ransomware has not been spread throughout the field, 3AW told its listeners on Thursday.

What you should Do

Use a Firewall: A firewall is a virtual barrier between your computer and the Internet. Everything coming into or leaving your computer must go through the firewall, which blocks anything that doesn’t meet specific security criteria. Before purchasing separate firewall hardware or software, check your operating system to see if there is a built-in firewall and whether it is turned on.

Update Operating System and Software Frequently: Computer and software companies frequently update their programs to include protection against new security threats. Update your operating system and software whenever new versions become available gives you an added measure of security. If available, activate automatic security updates so you will be alerted when updates are issued.

Avoid “Free” Security Scans: Be suspicious of an offer of a “free security scan,” especially when faced with an unexpected pop-up, email, or an ad that claims “malicious software” has been found on your computer.

Create and Protect Strong Passwords: Create strong email passwords and protect them with the following tips:

Use a Pop-up Blocker: Don’t click on links or open attachments in emails unless you know what they are, even if the emails seem to be from friends or family.

Use the Spam Filter: Utilize your email program’s automatic spam filter, which reduces the number of unwelcome email messages that make it to your inbox. Delete, without opening, any spam or “junk mail” that gets through the filter.

Backup Important Data: Copy important files onto a removable disc or an external hard drive, and store it in a safe place. If your computer is compromised, you’ll still have access to your files.

White House homeland security adviser Thomas Bossert said “the best and the brightest are working on” tracking who was behind the ransomware cyberattack.

Security researchers have discovered digital clues in the malware used in last weekend’s global ransomware attack that might indicate North Korea is involved, although they caution the evidence is not conclusive.

An early version of the ‘‘WannaCry’’ ransomware that affected more than 150 countries and major businesses and organizations shares a portion of its code with a tool from a hacker group known as Lazarus, which researchers think is linked to the North Korean government.

John Bambenek, a research manager at Fidelis Cybersecurity says “This implies there is a common source for that code, which could mean that North Korean actors wrote ‘WannaCry’ or they both used the same third-party code,’’

White House homeland security adviser Thomas Bossert said Monday that investigators were still working to determine who was behind the attack. The best and the brightest are working on it.

Victims have paid $59k to hackers

As of Monday afternoon, 227 payments have been made to the three bitcoin accounts linked to the cyberattack.

Several security researchers studying ‘‘WannaCry’’ on Monday found evidence of possible connections to the crippling hack on Sony Pictures Entertainment in 2014 attributed by the US government to North Korea. That hack occurred in the weeks before Sony released a satiric movie about a plot to kill North Korean leader Kim Jong Un.

However, Bambenek cautioned that the links are circumstantial. ‘‘It could be a freak coincidence,’’ he said. ‘‘The code in question is not a large portion of the overall Wannacry malware so it’s plausible that the attackers got it from somewhere else.’’

The spread of the WannaCry virus has slowed as new cyberdefenses have been put in place and some eight to 10 U.S. entities, including a few in the health-care sector, reported possible “WannaCry” infections to the Department of Homeland Security, a US official said.

Factories, hospitals, and schools were disrupted in China by the attack, the spread of the virus appeared to be slowing. State media said 29,000 institutions had been hit, along with hundreds of thousands of devices.

Researchers discovered a ‘‘kill switch’’ on the virus that stopped its spread from computer to computer, potentially saving tens of thousands of machines from further infection.

The ransomware program, which is spread through e-mail, encrypts computer files and then demands the bitcoin equivalent $300 to unlock them.

The worm called WannaCry infected  200,000 computers in more than 150 countries, tied the UK health service in knots, took out the Spanish phone company, made train travelers in Germany chaotic, and took big swipes out of FedEx, Renault, a reported 29,000 Chinese institutions, and networks all over Russia—including the Russian Interior Ministry.

Can you get infected by Wanna Cry Ransomeware?

No. MalwareTech defanged the malware. Although there are a few extraordinary situations where the threat persists (in particular if your network blocks access to one odd website), for most people, WannaCry has been out of commission since late Friday.

Well Do I  need to worry about it right now?

Yes. There have been reports from Matt Suiche of a new WannaCry variant that’s been sinkholed with 10,000 infections logged. The clones are coming, and many of them won’t be easy to stop. You have to get your Windows PC patched now.