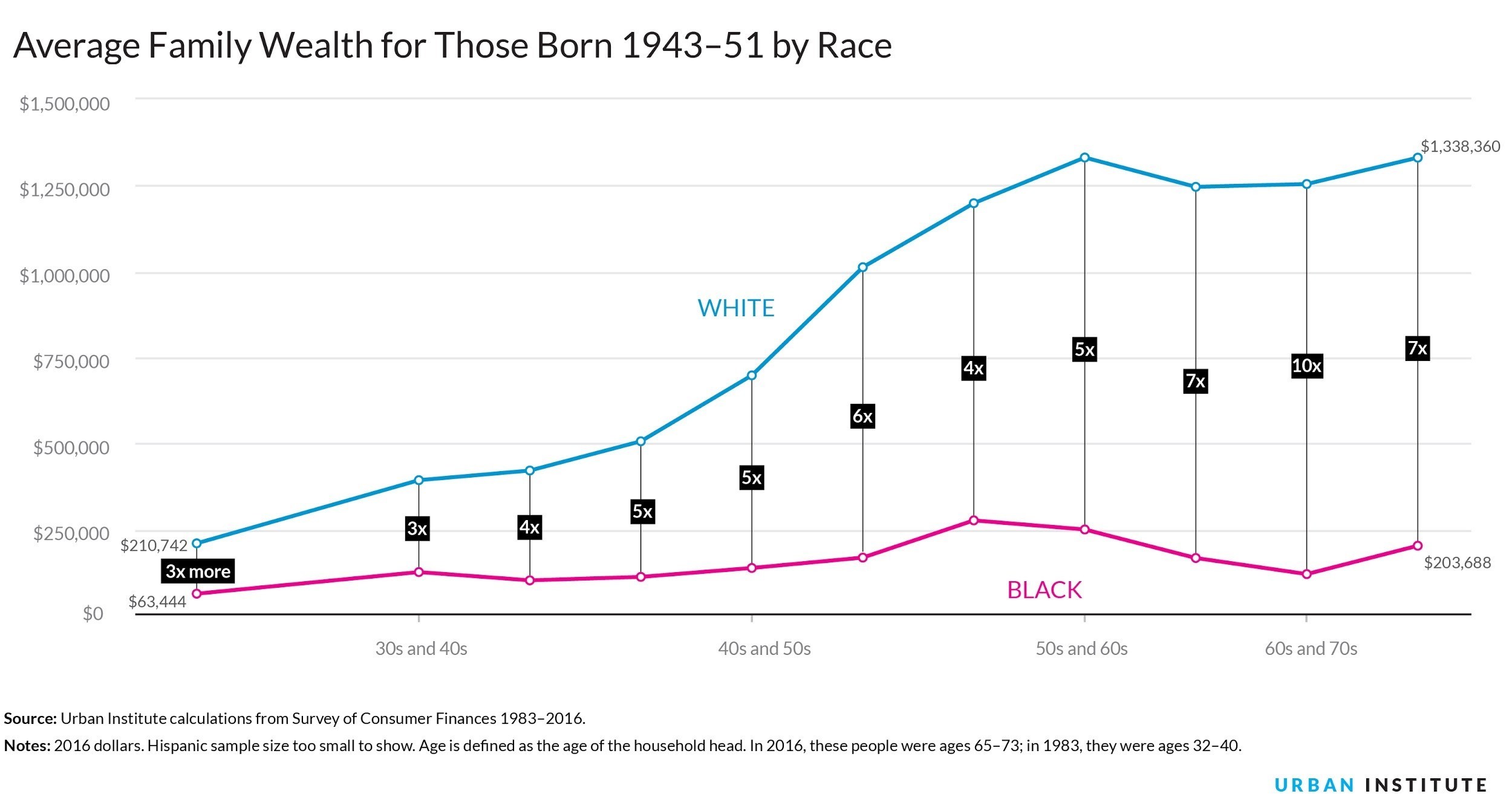 Children of middle-class African American families, are at risk of dropping out of the middle class altogether, according to the report.

The racial wealth gap in the US is the product of a series of interactions between social, historical, political, and institutional forces. While it’s a complex picture, in much the same way that addressing the gender pay gap has been shown to create positive ripples throughout a country’s economy, closing the racial wealth gap is in everyone’s interests.

Only 8% of black families in America can expect to be in receipt of an inheritance, compared with 26% of white families. Even then, the value of that inheritance is likely to be as much as one-third less. 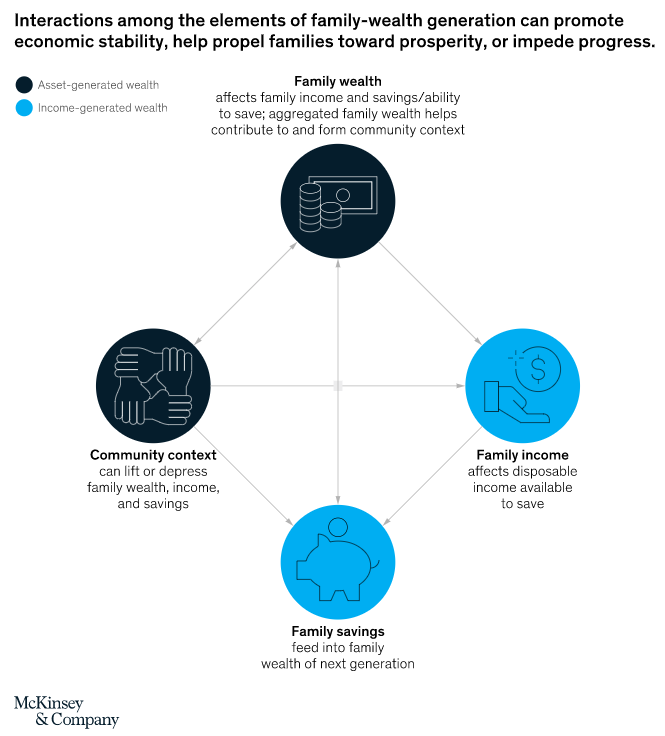 The average black family with a household income of $100,000 lives in a neighborhood where the average income is just $54,000. Home ownership is one of the most accessible forms of wealth accrual. Even when this is the only major owned-asset in a family, it can be a valuable inheritance for the next generation. But only about 40% of black families own a home, compared with 73% of white families.

African Americans are incarcerated at more than five-times the rate of white Americans and make up 34% of the total population in correctional custody.

Even discounting earnings lost during imprisonment, incarceration can reduce an individual’s annual income by as much as 40%, McKinsey says. 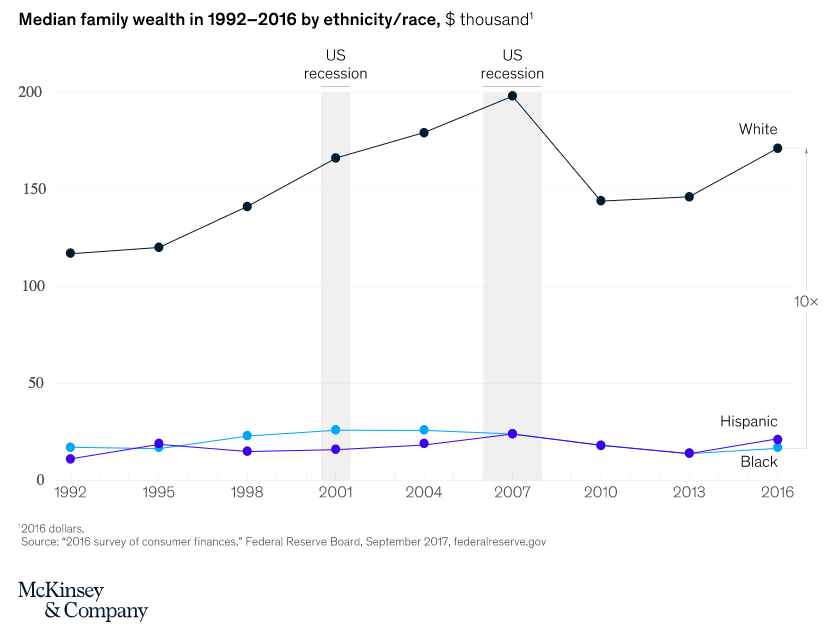 McKinsey estimates that closing the racial wealth gap in the US could add anywhere between $1 trillion and $1.5 trillion to the country’s economy – between 4% to 6% of GDP forecasts for 2028.

Uber apologized Monday after its automated Twitter account responded to a customer with the N-word. The Twitter user had adopted the racial slur as a username, which some believe might have been a deliberate move to trick the automated system.

The customer, whose Twitter handle was @realtheeCheney, messaged Uber about an unpleasant experience, tweeting “I had an awful driver today. I want my money back!!! Please respond so we can work this out.” Uber’s support account responded in a tweet with “We’re so sorry about that, (N-word)! Please send us a DM with your phone number with additional details of your concern so we can connect.”

With, this being the internet, a troll was involved in this sordid mess. Apparently responding to a customer complaint about a bad driver, the company replied that it was sorry, and then called the alleged customer a vile racist slur.

The new policy, which will be officially implemented next week, highlights Facebook’s policies, which govern the speech of more than 2 billion users worldwide. And Facebook still has to effectively enforce the policies if it is really going to diminish hate speech on its platform.

When reflecting on the progress African Americans have made, the reality is that when it comes to wealth — according to the paramount indicator of economic security — there has been virtually no progress in the last 50 years.

Based on data from the Federal Reserve’s Survey of Consumer Finance, the typical black family has only 10 cents for every dollar held by the typical white family.

Until the end of legal slavery in the U.S., enslaved people were considered valuable assets and a form of wealth. In the South, entrepreneurs and slave owners took loans out against the collateral value of their property in the form of people to fund new businesses.

The U.S. government has a long history of facilitating wealth for white Americans. From at least the Land Act of 1785, Congress sought to transfer wealth to citizens on terms that were quite favorable.

While the 1866 Homestead Act sought to include blacks specifically in the transfer of public lands to private farmers, discrimination and poor implementation doomed the policy. Black politicians during Reconstruction attempted to use tax policy to force land on the market, but this was met with violent resistance.

While blacks did make gains in wealth acquisition after chattel slavery ended, the pace was slow and started from a base of essentially nothing. Whites could use violence to force blacks from their property via the terrorism of whitecapping, where blacks were literally run out of town and their possessions stolen. This includes the race riots, as in Memphis in 1866 and Tulsa in 1921, which systematically destroyed or stole the wealth blacks had acquired, and lowered the rate of black innovation. Black wealth was tenuous without the rule of law to prevent unlawful seizures.

By 1915, black property owners in the South had less than one-tenth of the wealth of white landowners.

This trend remained stable for the next 50 years. In 1965, 100 years after Emancipation, blacks were more than 10% of the population, but held less than 2% of the wealth in the U.S., and less than 0.1% of the wealth in stocks. Wealth had remained fundamentally unchanged and structurally out of reach of the vast majority of blacks.

These racially exclusionary systems endured well into the 20th century.

A complicit Federal Housing Administration permitted the use of restrictive covenants, which forbade home sales to blacks; redlining, which defined black communities as hazardous areas, directly reducing property values and increasing rates; and general housing and lending discrimination against African-Americans through the 20th and 21st centuries.

Moreover, blacks were largely excluded from the New Deal and World War II public policies, which were responsible for the asset creation of an American middle class.

Why is Racism so Violently Prevalent today

Covert racism is a form of racial discrimination that is disguised and subtle, rather than public or obvious. Concealed in the fabric of society, covert racism discriminates against individuals through often evasive or seemingly passive methods. Covert, racially biased decisions are often hidden or rationalized with an explanation that society is more willing to accept. These racial biases cause a variety of problems that work to empower the suppressors while diminishing the rights and powers of the oppressed. Covert racism often works subliminally, and often much of the discrimination is being done subconsciously