President Donald Trump has asked the U.S. Postmaster General Megan Brennan to double shipping rates for Amazon and some other companies — and some financial experts worry Amazon may pass the costs along to consumers.

Postmaster Brennan has refused to comply with the president’s requests, see more.

Trump alleges that Amazon is being subsidized by the Postal Service. He has also accused The Post of being Amazon’s “chief lobbyist” as well as a tax shelter. He says Amazon uses these advantages to push bricks-and-mortar companies out of business.

Florida Attorney-General Pam Bondi with Mr Donald Trump at a meeting with local and state officials on school safety on Thursday. Mr Trump has suggested arming a significant portion of the educator workforce – between 10 and 40 per cent of teachers – using federal resources.

United States educators have expressed frustration at a proposal by US President Donald Trump for teachers to take up arms to defend their classrooms against school shooters.

Many teachers expressed concerns about scenarios in which they could face shooters on a hectic campus – or even, potentially, draw a gun to confront an armed and dangerous student.

Mr Trump suggested arming a significant portion of the educator workforce – between 10 and 40 per cent of teachers – using federal resources. He said military veterans who teach would be prime candidates for these roles.

Many schools already hire police officers or armed guards to patrol campuses with the help of federal money. About 57 per cent of public schools in the 2015/2016 school year had security staff on campus at least once a week and nearly 43 per cent were patrolled by armed law enforcement officers, according to federal data.

Dr Dewey Cornell, a University of Virginia professor who studies school safety said, “The proposal to arm teachers might be emotionally appealing after a school shooting, but it is not practical or realistic,” said

“We should place more emphasis on preventing shootings than preparing for shootings. Prevention must start long before a gunman shows up at school. Instead of more guards, we need more counselors.” 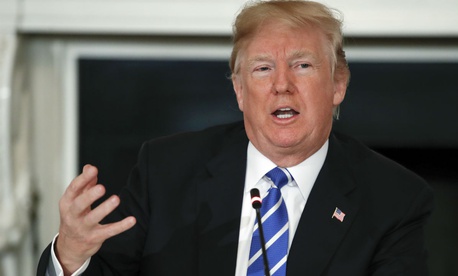 The ” blueprint “. The budget repeatedly noted the president’s priority to trim agency rolls across government, but also suggested agencies find new positions for workers whose jobs have or will become obsolete. The administration will invest in “reskilling the workforce to meet current needs,” the president said in the document.

Current employees can shift from legacy positions into emerging fields such as data analysis, cybersecurity and other IT disciplines.

The full House Appropriations Committee voted to approve FY2018 funding for libraries. By a 28-22 margin, the committee approved the Labor, Health and Human Services, and Education (LHHS) funding bill, which proposes roughly $231 million for the Institute of Museum and Library Services (IMLS)—including $183.6 million for Library Services and Technology Act (LSTA) programs, and $27 million for the Department of Education’s Innovative Approaches to Literacy (IAL) program—essentially at 2017 funding levels.

In addition to saving the IMLS, the LHHS bill includes level funding for the Corporation for Public Broadcasting. However, it funds the Department of Education (DOE) at $66 billion—a cut of $2.4 billion from 2017, which includes the elimination of some important library-related programs, including the DOE’s Striving Readers program. ALA officials said they would work to restore it.

Meanwhile, on July 18, the House Appropriations Committee approved by a 30-21 margin the FY2018 Interior and Environment Appropriations, which includes $145 million each for the NEH and the NEA, roughly equal to FY 2017 funding levels.

The key votes come after President Trump’s call  in May to eliminate IMLS and virtually all federal funding for libraries, as well as a host of other vital programs and agencies, including the NEH and the NEA. And, it comes after Congress, earlier in May, passed a belated 2017 budget that actually upped the IMLS, NEH, and NEA budgets.

Special rules apply to the official Twitter account of the president of the United States (@POTUS) that do not currently apply to his personal account (@realDonaldTrump). The rules are described under the Presidential Records Act, which states that certain records generated by the White House do not belong to the US president, but are instead a matter of public record.

A new bill introduced in Congress this week is looking to enforce those rules with regard to Trump’s personal account since he often uses it to make announcements altering US policy, both foreign and domestic—even though there’s a zero chance in hell anything Trump tweets will ever disappear online.

It was introduced by Rep. Mike Quigley, the Illinois Democrat who in March brought us the MAR-A-LAGO Act, which would require the publication of White House visitor logs. (The Trump White House has decided to keep the logs secret, reversing an Obama administration policy of publishing them automatically.)

A livestream of the White House went viral last night in certain corners of the internet when strange red lights were seen strobing in the windows for almost 17 minutes. White House spokespeople and the Secret Service offered no comment on the cause of the phenomenon.

Many of the comments are so far fetched and ridiculous. Maybe they’re holiday lights!

Artifax- Helping To Save The National Endowment For The Arts

There’s a new website that provides citizens a way to get artistic with their political grievances. Artifax allows constituents to fax a work of art to their elected officials, in protest of Trump’s proposal to eliminate the National Endowment for the Arts. Artifax is the brainchild of Los Angeles design studio Use All Five, which has worked with clients ranging from UCLA to the Guggenheim.

The site was launched last week featuring work by 20 artists, designers, and studios. Visitors to the website first select a work of art, scroll page down, and enter their zip code. Artifax then pulls up a list of elected officials for that district, and users can send a custom or auto-generated message to the representative of their choice. (You don’t have to print anything—the message is faxed digitally.) Eight days since launch, people some 800 faxes have been sent in total.