Game organizers have verified rumors that the Olympics were hacked during Friday’s opening ceremony. However, the source of the attack has yet to be revealed. While systems including the internet and television services were affected on Friday evening, organizers assured media that the breach “had not compromised any critical part of their operations,” according to a Reuters report.

Cybersecurity experts noted in January that there were early suggestions that Russia-backed attackers may have wanted a payback as a retaliation against the nation’s ban from the Pyeongchang Games. The Russian federation has not been allowed to compete as a result of anti-doping regulations (though Russian athletes have been taking part of the games as the Olympic Athletes from Russia, or OAR).

Russia denies the hacking and North Korea may also serve as a prime suspect. The hack was short-lived and quickly addressed. “All issues were resolved and recovered yesterday morning

An artificial “earthquake” in North Korea created by a hydrogen bomb was felt throughout the region today. The “artificial quake” measured 6.3-magnitude and was followed by a 4.6-magnitude quake originating near the North’s main testing site at Punggye-ri.

The  Russian ministry issued a statement on today urging immediate dialogue and negotiations. It says that’s the only way settle the Korean Peninsula’s problems, “including the nuclear one. The ministry says Russia reaffirms its readiness to participate in negotiations, “including in the context of the implementation of the Russian-Chinese road map.”

Under that proposal, North Korea would suspend nuclear and missile tests in exchange for the US and South Korea suspending their joint military exercises. 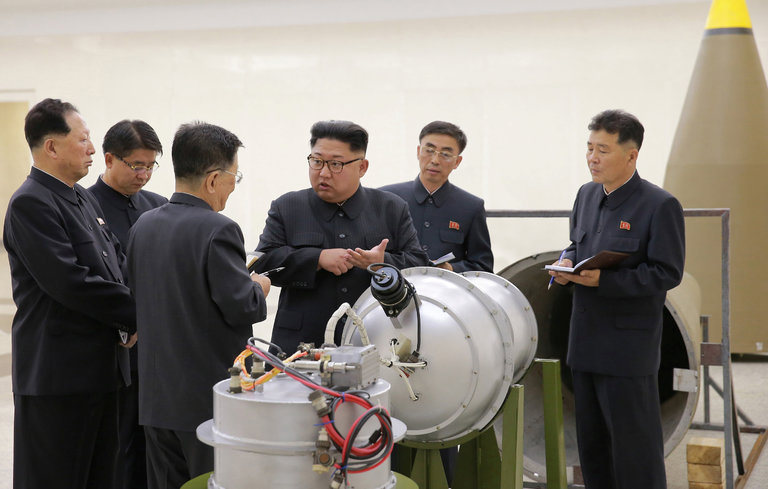 I DO NOT UNDERSTAND WHY THEY ARE SO PROUD OF THIS

Human rights activists are coming up with efforts to take out the regime via sitcoms and pop music on thumb drives that they get into North Korea in increasingly creative ways.

Thor Halvorssen, president of Human Rights Foundation, an organization funding the efforts to smuggle foreign media into the country says “ The most effective way is to have the regime crumble from the inside. And the way to do that is by flooding the country with foreign media and educational material that is going to turn the tide against this fake propaganda.”

Activists in South Korea began smuggling old flash drives loaded with media from the outside world into North Korea in 2015. In 2016, they delivered 10,000 drives. Now, after a new donation of 100,000 new flash drives, the Flash Drives for Freedom campaign plans to infiltrate deeper into the country.

The drives are loaded with K-pop music, action movies, documentaries, travel photographs, a Korean copy of Wikipedia that can be read without internet access, and as much other content as can fit on the drive. Technology is making it easier to get drives across the border. The drives were originally smuggled by foot and exchanged across a river on the border with China while guards were bribed. Now, in addition to that process, some are attached to balloons and floated over the border. A group called No Chain,( partners with the Human Rights Foundation), is increasingly relying on drones to make deliveries.

When they arrive in North Korea the content is often copied and sold. Instead of using computers, North Koreans typically plug the drives into cheap portable media players from China that can run on batteries. “Every North Korean is one degree removed from someone with one.

The activists are looking for more donations of drives

This Is What They Play Every Morning In North Korea

The Song Is Played On Loudspeakers Throughout Pyongyang

YouTube has blocked the  a North Korean state-run channel broadcaster used as a propaganda tool by the country’s autocratic regime.

The channel’s content consist of news broadcasts on everything from Kim Jong-Un’s nationwide outings to coverage on the country’s nuclear tests. Now, when you visit Korean Central Television’s YouTube page, you’re confronted with a message that states: “This account has been terminated for violating YouTube’s Community Guidelines.”

Peter Blackstock at Grove Atlantic bought North American rights to The Accusation, a short story collection by a North Korean writer published after the work was smuggled out of the country. The author’s pseudonym name is Bandi. The book was initially published by the South Korean house Chogabje in 2014. Barbara Zitwer, who has an eponymous agency, is handling rights on behalf of Chogabje. In addition to the U.S. sale, the book has been acquired in the U.K. (where Serpent’s Tail/Profile nabbed U.K. and Commonwealth rights); France (Éditions Philippe Picquier); and Spain (Libros del Asteroide). Zitwer also confirmed that offers on the book were in from a number of other territories, including the Netherlands and Germany. The collection hosts a range of characters as it paints a portrait of daily life under a dictatorship. Zitwer added that the book is the first known work of fiction by a North Korean to make it out of the closed country