GoogleStops Marijuana Delivery Companies From Selling POT Through Their Apps 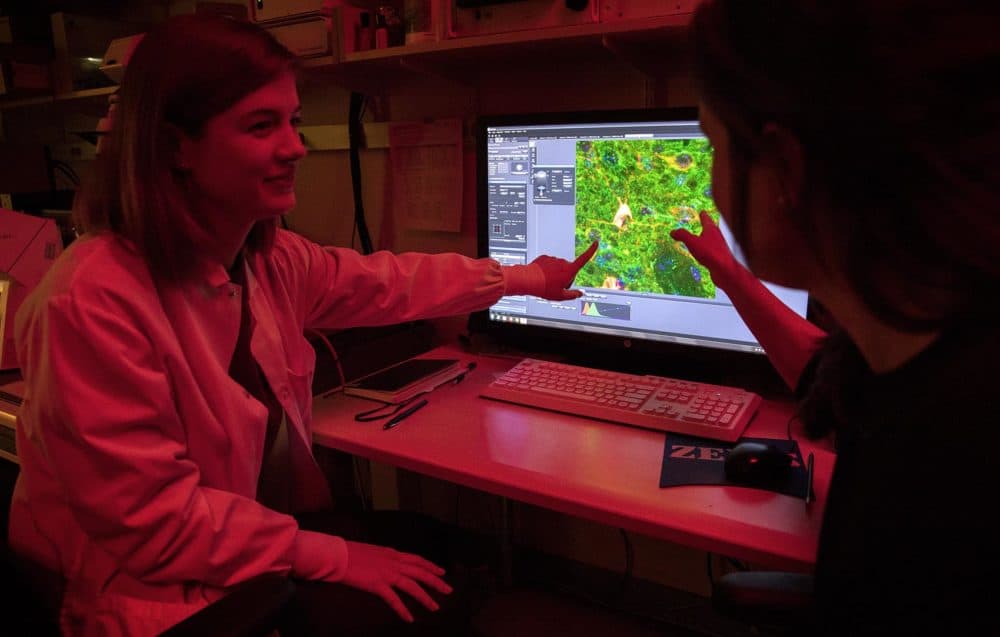 Amanda Vernon, left, reviews an image of cells in a mouse brain with MIT professor Myriam Heiman. The $9 million donation includes about $1 million for work in Heiman’s lab. (Robin Lubbock/WBUR)

The Manhattan-based donor Bob Broderick made tens of millions of dollars by investing in the legal marijuana industry in Canada. So now he’s funneling some of his money for solid research on how cannabis affects the brain.

Professor John Gabrieli director of the Martinos Imaging Center at MIT says heavy cannabis use is very widespread among people with schizophrenia, and it’s not clear to what extent cannabis is helpful or harmful to them.

“That’s why we need the science,” he says. “Because right now, it’s happening without the science, and it’s likely to happen all the more as marijuana becomes highly available legally in many states.”

Federal science authorities have called for major new research on the potential benefits and harms of cannabis use. The National Institutes of Health are supporting more than $140 million of research on cannabinoids.

But support from private donors has been real slow rolling in. Late last year, Inside Philanthropy, reported on a gift of nearly $5 million to support cannabis research at the University of California San Diego, under the headline “Where Most Donors Fear To Tread.”

Research from the 2016 National Youth Tobacco Survey of more than 20,000 middle school and high school students reported that More than 5,200 students reported have tried e-cigarettes,according to the journal JAMA Pediatrics. But the researchers were especially interested in what else kids were vaping with the device. About one out of every 11 students surveyed, or 9 percent, answered, “Yes, I have used an e-cigarette device with marijuana, THC [tetrahydrocannabinol] or hash oil, or THC wax.”

The use of marijuana in these products is of particular concern because cannabis use among youth can adversely affect learning and memory and may impair later academic achievement and education. Vaping is generally considered less dangerous than smoking, because burning tobacco or marijuana generates chemicals that are harmful to lungs. But there is little research on e-cigarettes’ long-term effects, including whether they help smokers quit.

The University of Ottawa is offering a Cannabis Law course.  Dubois, a partner at the Ottawa law office of Perley-Robertson, Hill & McDougall, and colleague Megan Wallace will be the lead instructors of the new cannabis law course at the University of Ottawa. The course, the first of its kind in Canada, will run for about three weeks. Students will learn about the licensing and regulatory frameworks of the cannabis industry as well as how legalizing the drug will affect everything from employment to property law. Diane Labelle, general counsel at Health Canada Legal Services, will teach a similar course at uOttawa in French this fall.

Commercial landlords now face heavy penalties for allowing pot to be sold at their properties, a situation that will have to change in time for private retailers to hit the market next April.

Dubois course will also feature a field trip to the Tweed production facility in Smiths Falls, where students will get a first-hand look at the product they’re learning about.

Ryerson University in Toronto, meanwhile, said this summer its Ted Rogers School of Management would be introducing a course ​– appropriately numbered 420 ​– called “the Business of Cannabis,” focusing on topics such as retailing, marketing, quality control and financing. And Montreal’s McGill University plans to enter the field by offering a diploma program in cannabis and cannabis production, starting next fall.

The cannabis industry has an urgent need for workers with highly specialized skills in areas such as genetics, horticulture, cultivation techniques, pest control and biotechnology.

Number Of People Employed In The Cannabis Industry Triples 20 630,000 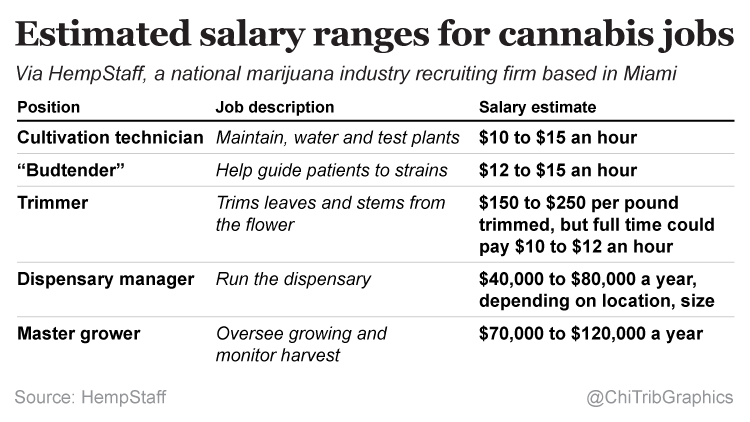 Marijuana proponents believe pot businesses can employ workers that are being laid off as the nation’s manufacturing and retail employment shrinks. Unions like the Teamsters see the marijuana industry as a promising source of new recruits.

President Donald J. Trump signaled his approval of the industry in April, marijuana employment seems poised for even more growth. While Attorney General Jeff Sessions rescinded Obama-era policies protecting state-legal marijuana companies in January, earlier this month Trump assured a Colorado lawmaker that the federal government will respect state law on pot – easing fears of a federal crackdown. Jobs in the marijuana business comprises about half of all the U.S. California leads the nation in marijuana employment, with fellow western states that have also legalized adult-use of the drug – Colorado, Washington and Oregon –

Between 2017 and 2021, the reefer industry is expected to create almost 1 job for every 1,000 people in the U.S. That figure includes occupations like budtenders that work directly with marijuana, ancillary occupations like lawyers that are hired by cannabis companies and induced jobs like coffee shop baristas in a city experiencing weed-fueled economic growth. The potential for job creation is highest in Massachusetts, where more than 3 jobs per 1,000 people will be added during that period as a result of the reefer industry.

The Combination of Weed & Technology 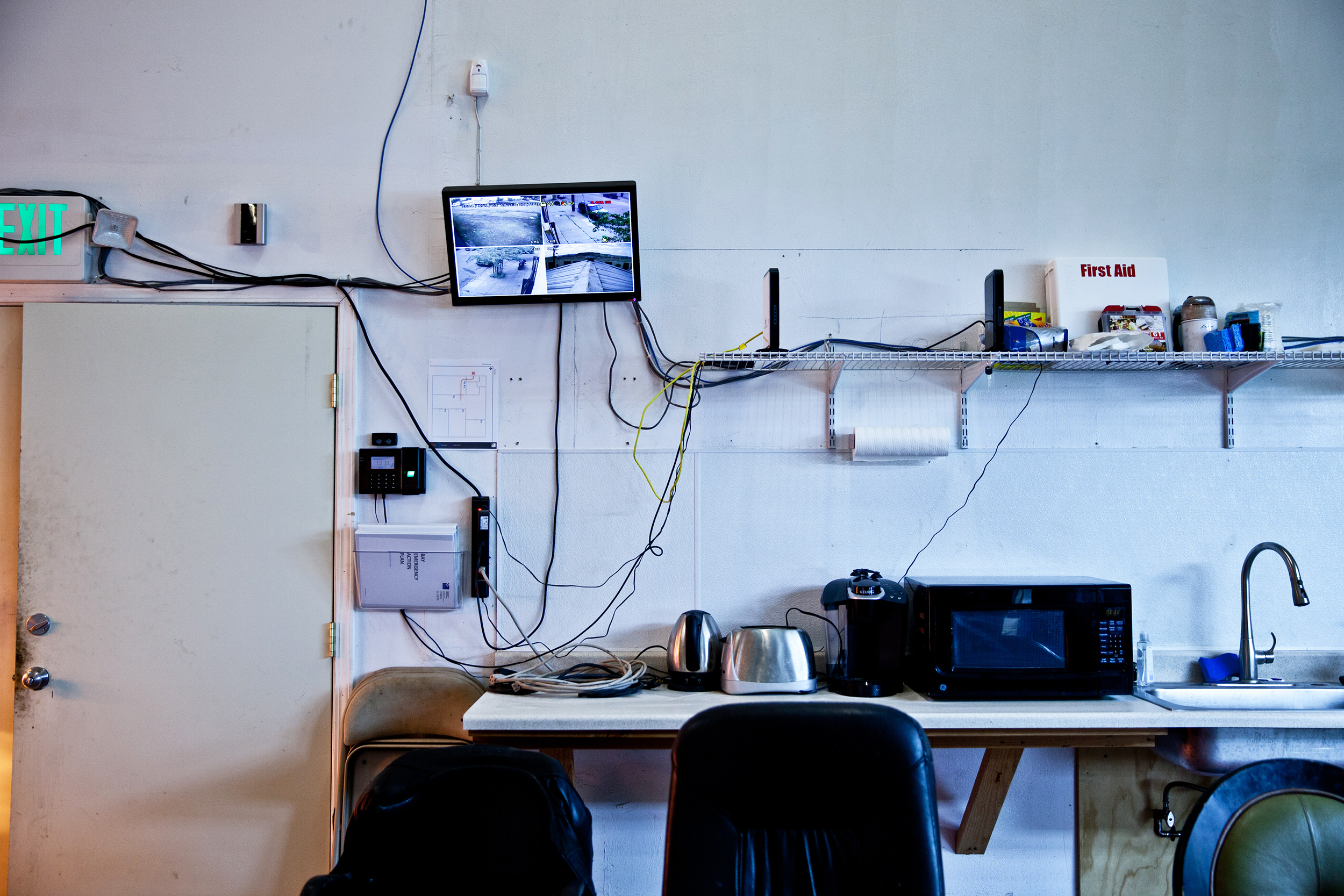 More  & more states are legalizing adult use of marijuana and a wave of technology is spreading throughout the industry, including specialized cannabis software and technology for more efficient grow operations, as well as existing tech that can be tailored to the industry. Guardian Data Systems is just one example of marijuana technology growth. Guardian began as a service to buy medical marijuana from dispensaries online using a credit card — a novelty in a mostly cash-only industry. The system enables pre-approved customers with state-licensed dispensaries to use their credit cards to pay for product online and receive it via home delivery in states where it’s legal to do so, like Oregon and Nevada. Guardian’s tech offerings have transformed into a complete enterprise software solution for cannabis businesses, including point-of-sale and distribution software, automated inventory and delivery options, and more.  MassRoots and Leafly provide information like THC and CBD levels, aroma and flavor in a plethora of cannabis strains.  Artificial intelligence. PotBotics, uses a recommendation engine (read: AI) that takes plant DNA analysis and other cannabis research to guide medical marijuana patients to tailored treatment with appropriate strains and products. The software can even make appointments for patients with licensed medical cannabis clinics nearby, and also some in a mobile app called PotBot.

Here’s what they say

You are cordially invited to join DCMJ for the inaugural #Trump420 taking place on January 20, 2017 in Washington, DC!

We will gather on the west side of Dupont Circle at 8am for coffee & tea and parade down to the National Mall at 10am. Along the way we’ll hand out 4,200 joints of legally grown cannabis! At 4 minutes and 20 seconds into President Trump’s speech we’ll light up! (unless President Trump comes out now in support of full cannabis legalization in all 50 States and DC!)

We legalized cannabis in Washington, DC and we are not going to let anyone take that away from us! This is an outreach opportunity to show President Trump’s supporters we are the marijuana majority! Join us for smokin’ fun time!

Possession of up to two ounces of marijuana is legal in the District of Columbia, thanks to the passage of Ballot Initiative 71, a campaign that was headed by the DCMJ in 2014. What is not legal, however, in D.C. is purchasing or selling marijuana. In this respect, the only legal way to distribute marijuana to large groups of people in D.C. is to give it away free of charge.

How long it will take the group to distribute 4,200 free joints is unknown, but it is worth noting that organizers of one of the largest scheduled Inauguration Day protests, the Women’s March on Washington, estimate that around 200,000 people will show up for their event alone.