FBI Warns Your Smart TV could Spy On You

Smart TVs today come equipped with microphones or cameras that enable you to control the device via your voice or use it for video chatting.  The FBI warns that the  device could be used to spy on you. TV manufacturer and app developers may be listening and watching you, and that same  television can also be a gateway for hackers to come into your home. Samsung even tweeted a reminder to owners of its smart TV to scan their sets for viruses every few weeks in order to “prevent malicious software attacks” — and then deleted the tweet after media coverage sparked backlash. If you do buy a TV, make sure to change any default passwords and figure out how you can turn off its cameras or microphones.

The million dollar program, which is believed to be the country’s first, features VR headsets and video-game-style controls that teens can use to avoid potentially dangerous encounters, police said at a press conference.

Organizations such as schools, churches and other youth groups can use the software. The NYPD is using virtual reality to help teenagers deal with real life on the street.

The virtual Reality game is known as  “Options,” the program puts groups of 10 to 15 teens that the police invite in through a three-day curriculum so they can gain emotional intelligence to de-escalate situations when they are confronted by gang members in their neighborhoods.

In one virtual scenario, a gang confronts the player in a park and asks him or her to join their crew. The player can choose to stay, go or talk to the troublemakers.

The so-called Options program encourages “emotional intelligence” and “deescalation” in a medium that teens can relate to, officials said.

Other real-life-style situations players will encounter include being stopped by police or being asked to commit a crime.

The police feel that public safety is a shared responsibility, and it’s crucial that the voice of our city’s youth is included in neighborhood policing.

The game was developed by Street Smarts VR, which also makes police training systems. It not clear when the game will be available.

Librarian With Mobile App Habit Gets 30 Days & Some More

Players from Chinese eSports organisation LGD Gaming practicing at the one of the team’s villas in Shanghai. Peter Stebbings / AFP

eSports is said to be on a trajectory to become bigger than the US National Football League (NFL) or the National Basketball Association (NBA), or indeed, any so called “true sport”.

Mr Leonsis told the audience at the Monumental Sports & Entertainment (MSE) Global Summit earlier this month said “It will dwarf the NFL, it will dwarf the NBA, because first and foremost, it is a global phenomenon.”

eSports will be a demonstration event at the 2018 Asian Games in Indonesia, and then a medal event four years later in China.

Alex Lim, the South Korean secretary general of the International eSports Federation (IeSF), says ninety per cent of the worldwide population is on the internet and half are playing games,” .

Global revenue from eSports soared 41 per cent to US$696 million with $266m coming from sponsorship, according to the eSports research consultancy Newzoo. 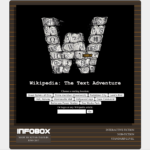 Wikipedia as a classic text adventure: A “game” Wikipedia: The Text Adventure generates a list of major landmarks, and clicking any of them takes you to a landing page with a basic location description as pulled from its Wikipedia article summary, along with a list of nearby locations marked off by cardinal directions. You’re restricted to a text box, and, appropriately, typing “help” into it brings up a list of commands you can type. (Mobile users can also tap on keywords in the summaries, which isn’t as cool, but it’s a welcome alternative.)