Archive for the ‘Political’ Category

The Amazon In New York Survey

. By a 67-21 percent margin, New Yorkers say that Amazon cancelling its planned second headquarters in Queens was bad for New York. By as nearly as large a margin, 61-30 percent, they support the deal in which Amazon would receive up to $3 billion in state and city incentives and create up to 25,000 jobs if Amazon reconsiders, according to a new Siena College poll of New York State registered voters released today.

An overwhelming 79 percent of voters say parents should be required to have their children vaccinated before attending school, regardless of the parents’ religious beliefs. Voters continue to support making the two-percent property tax cap permanent, legalizing recreational use of marijuana, and eliminating monetary bail for misdemeanors and non-violent felonies. They are split on congestion pricing, and by a nearly two-to-one margin, they oppose allowing undocumented immigrants to get a New York driver’s license.

About 63 percent of Democrats, Republicans and independents, upstaters and downstaters, men and women, young and old, black and white New Yorkers agree: Amazon pulling out of Queens was bad for New York. Even 56 percent of self-described liberals think it was bad for New York,” said Siena College pollster Steven Greenberg. “While some may have celebrated Amazon’s announcement to pull the plug, the vast majority of New Yorkers of every stripe thought it was bad for the Empire State.

There’s certainly blame enough to go around. More people think that Amazon, Governor Cuomo, Mayor de Blasio, the State Senate, and local Queens activists were villains in this saga than they were heroes. However, voters say the biggest villain was Representative Alexandria Ocasio-Cortez. Only 12 percent call her hero, while 38 percent label her a villain,” Greenberg said. “Amazon itself was seen as the biggest villain among Democrats, but Republicans and independents had Ocasio-Cortez as far and away the largest villain, followed by the local Queens activists.”

“By a wide margin, New Yorkers would support the deal coming back together if Cuomo and others can convince Amazon to reconsider,” Greenberg said. “The Amazon deal was seen as very contentious, however, there was strong support for it last month, before it got cancelled. There is an overwhelming feeling that its cancellation was bad for the state. And there is strong support – among all demographic groups – for Amazon to reconsider and move forward. The jobs outweigh the cost of government incentives in the minds of most voters.”

“Making permanent the property tax cap has strong support from every party and every region,” Greenberg said. “Eliminating monetary bail and legalizing recreational marijuana are both strongly supported by Democrats, opposed by Republicans and receive tepid independent support. Congestion pricing, which was strongly supported in January, is now break-even.

“Cuomo saw his favorability rating tick up to near break-even, up from the lowest favorability rating he ever had. His job performance rating, negative 38-61 percent, also moved up a little, although it remains significantly below water,” Greenberg said. “Both houses of the Legislature also saw small jumps in their favorability ratings and both are in positive territory by high single digits.

“Schumer’s favorability rating moved back into positive territory after being break-even last month. Senator Kirsten Gillibrand’s favorability rating is unchanged from last month, and nearly one-quarter of voters do not know enough about her – despite her presidential campaign – to have an opinion,” Greenberg said. “Ocasio-Cortez, with a negative 31-44 percent favorability rating, is as well known to statewide voters after three months in office as Gillibrand is after ten years as senator. While Democrats view Ocasio-Cortez favorably, independents view her unfavorably more than two-to-one and Republicans view her unfavorably, 68-6 percent. She is viewed slightly favorably in New York City but strongly unfavorably upstate and in the downstate suburbs.”

Dems in Control: Moving Too Far to the Left; Making it Harder for Businesses; Ignoring Upstate

“While voters are evenly divided on whether downstate has too much power, by 51-28 percent voters say the interests of upstate are being ignored. Not surprisingly, nearly three-quarters of upstaters believe this, but New York City voters are closely divided,” Greenberg said. “That said, a clear majority, 54-32 percent, disagree with the view that state government worked better when Republicans controlled the State Senate.”

This Siena College Poll was conducted March 10-14, 2019 by telephone calls conducted in English to 700 New York State registered voters. Respondent sampling was initiated by asking for the youngest male in the household. It has an overall margin of error of +/- 4.2 percentage points including the design effects resulting from weighting. Sampling was conducted via a stratified dual frame probability sample of landline and cell phone telephone numbers (both from Survey Sampling International) from within New York State. Data was statistically adjusted by age, party by region, and gender to ensure representativeness. The Siena College Research Institute, directed by Donald Levy, Ph.D., conducts political, economic, social and cultural research primarily in NYS. SCRI, an independent, non-partisan research institute, subscribes to the American Association of Public Opinion Research Code of Professional Ethics and Practices.

New York Times reporter Michael Schmidt has a Mueller-oriented project in the works.  Schmidt has blown the lid off some of the most consequential stories about the Russia investigation, and he now has a deal with Random House—brokered by Gail Ross of the Ross Yoon Agency. James Stewart is writing a book about the relationship between the White House, the F.B.I. and the Justice Department. Stewart, whose longtime agent is Amanda Urban at I.C.M., is working with Ann Godoff at Penguin on the as-yet-untitled work, which he said is tentatively slated for a fall 2019 release. It appears that the big political books of the Trump era have been minting big bucks. Jeremy Peters’s Insurgency: The Inside Story of the Battle for the Soul of the Republican Party, sold at auction in the high six figures. Earlier this year, Michael Wolff saw nearly 2 million copies of Fire and Fury fly off shelves in a matter of three weeks.

The Senate Intelligence Committee hosted the morning session, focusing on efforts being made to keep elections safe.

It Seems That Wikipedia Has A Gender & Race Problem

The world’s fifth-most-visited website has a long-running problem with gender bias: Only 18 percent of its biographies are of women. Surveys estimate that between 84 and 90 percent of Wikipedia editors are male. Quicksilver, is a software tool by San Francisco startup Primer designed to help Wikipedia editors fill in blind spots in the crowdsourced encyclopedia. Its under representation of women in science is a particular target. Quicksilver uses machine-learning algorithms to scour news articles and scientific citations to find notable scientists missing from Wikipedia, and then write fully sourced draft entries for them.

The summaries it generates are intended to provide a starting point for Wikipedia editors, who can clean up errors and check the sources to prevent any algorithmic slip-ups contaminating the site. 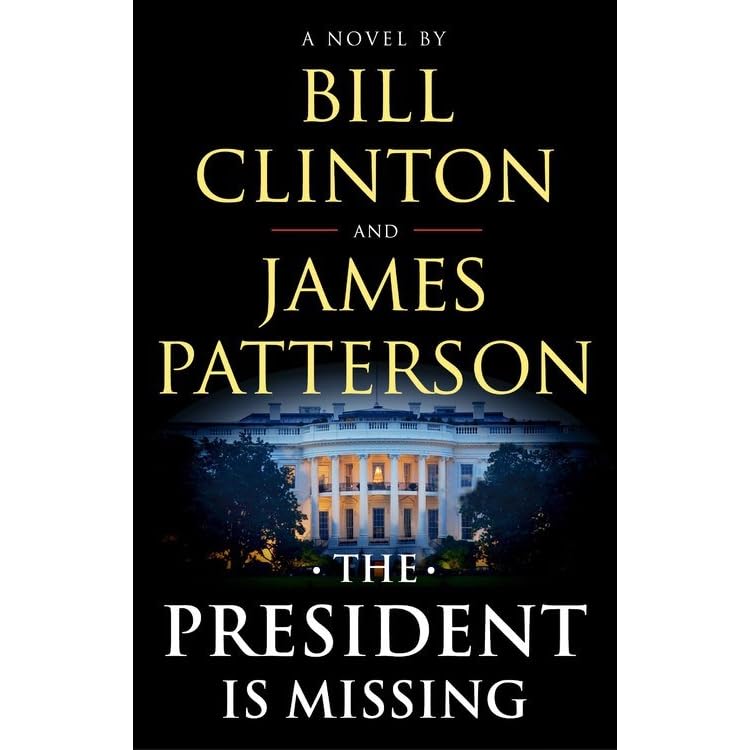 Former President William Jefferson Clinton and well-established mass-production author James Patterson have collaborated on a novel titled The President is Missing. The book is a political cyber-thriller of sorts, the second such book from a member of the Clinton family—that is, if you count Hillary Clinton’s What Happened as one. And just as with with Ms. Clinton’s book, The President is Missing gives shout outs to Russian hacking groups, mentioning Fancy Bear by name.

The President is Missing is, however, a work of fiction. At 513 pages in hardcover. The prose is largely marked by Patterson’s hand as well, but there are places where Clinton’s voice pushes through. The plots about a Democratic president from a southern state is on the verge of facing an impeachment (sound familiar?) in the midst of a national security crisis. A terrorist mastermind has managed to plant “wiper” malware in every computer in the United States. Racing against time, the president disguises himself, exits the White House through a secret tunnel, and meets in person with the hacker who helped distribute the malware while a crack mercenary hit squad led by a pregnant Bosnian sniper attempts to take the hacker and President Duncan out.

The US Senate today voted to reverse the Federal Communications Commission’s repeal of net neutrality rules, with all members of the Democratic caucus and three Republicans voting in favor of net neutrality.

The Senate approved a Congressional Review Act (CRA) resolution that would simply undo the FCC’s December 2017 vote to deregulate the broadband industry. If the CRA is approved by the House and signed by President Trump, Internet service providers would have to continue following rules that prohibit blocking, throttling, and paid prioritization.

FCC Chairman Ajit Pai has scheduled his repeal to take effect on June 11. If Congress doesn’t act, the net neutrality rules and the FCC’s classification of ISPs as common carriers would be eliminated on that date.

As businesses struggle to find and retain workers, the opioid crisis is making their challenges even greater.

The Kentucky Chamber, in a 2017 report, took a deep dive into Kentucky’s low workforce participation rate and found that the opioid epidemic, and incarceration due to drug charges, are leading factors in Kentucky’s lack of workers.

Five state chamber presidents sent a letter to Senate Majority Leader Mitch McConnell and other members of Congress, encouraging them to find a policy solution that focuses on treatment with a specific goal: getting people on the path to recovery and back into the workforce.

Following the business community’s recommendation, Sen. McConnell introduced the CAREER Act, which will ensure patients in recovery have the resources they need to return to healthy, productive lives and reenter the workforce.

The CAREER Act proposes a five-year pilot program in five states that have been hit hardest by the opioid epidemic to offer wrap-around support services for individuals transitioning out of treatment programs and back into the workforce. These services will include workforce training and transitional housing.

U.S. Rep. Brett Guthrie, R-Ky., is also championing a critical piece of legislation, the Comprehensive Opioid Recovery Centers Act, to make sure people have access to all the available treatments they need to beat opioid addiction. Together, these forward-thinking policies will help address the opioid epidemic from treatment through recovery and reintroduction into the workforce.